See this letter for details.

Dredging on the Somerset Levels

John Osman, Leader of Somerset County Council is supporting The Royal Bath and West Society who have set up a relief fund to assist Somerset residents whose homes and businesses have been flooded over the last two months. Cllr Osman asks if your council could please consider making a donation to the fund which will help start other flood preventative measures.

It is my intention to fell some trees and branches which abut Underhill from my property starting on Monday 10th to 12th Feb. This work was delayed from January. There will be some disruption to traffic flow along Underhill for which I apologise in advance for any inconvenience caused.…

They are creating an open plan environment, with longer opening hours (over lunch too).  Once the work is finished it will be open continuously from 09:00 till 17:30 every day except Sunday.

It will however be closed from Thursday 20th Feb reopening at 13:00 on Friday 28th Feb.

Nearest alternative Post Offices can be found at Bourton and Gillingham while the work is being done.

A roundup of news, research and work provided by the Rural Services Network,
highlighting issues for older people living in rural areas in the last 12 months.

Since August we have been collecting statistics on the use of this website to help us improve it. On average more than 200 pages are viewed every week. In a typical month there are 150 unique visitors to the site (not all from the village), they look at an average of 5 pages each visit and stay for 3 minutes.

News and Events are the most viewed, and some people never get beyond the first page they enter, but 72% go from  the opening page to another page. See Requests and Offers below for details.

Here is some advice from Somerset Community Foundation on surviving the floods and the cold. Link here

Come and join us, bring your friends for some very enjoyable film & social evenings

Very sadly, due to weather and health I am unable to proceed with the maintenance and trees over hanging the highway as planned.

Dear Everyone
this is to advise  you that due to illness it will not be possible to hold the Black Bin Cafe tomorrow morning, January 3rd.
We regret this,  but hopefully it will be open again on the 17th January at 10.30am

Clear sky just now but the weather looks dreadful for tomorrow. The mince pies are being baked as I type so you are welcome for coffee and mince pies and the walking is optional! I'm happy to guide the (fool)hardy ones around on a brief one hour walk to wash away the cobwebs! 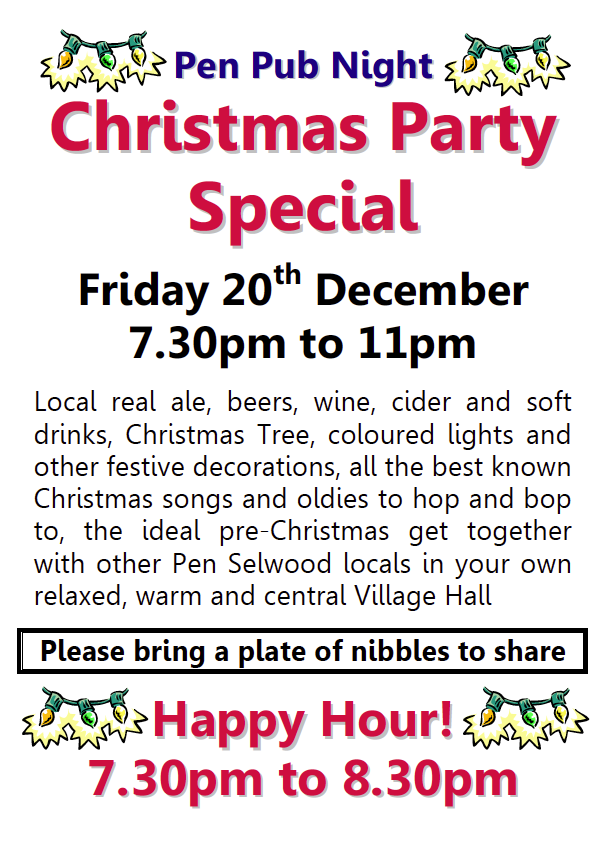 Many thanks to those who organised and supported the Coffee Morning today and to Anne and Cliff Clark for hosting it.  All together we raised a terrific £475 for the Church.

4 years ago the Pen Selwood Allotments became an ongoing concern at the picturesque site at Pitts Farm and continues to be a successful and steady Association. The tenants have been growing a variety of delicious vegetables, juicy fruits and beautiful flowers all for the kitchen table and hungry tummies!

Currently there is space available to rent and this is the perfect time to prepare and get stuck in for the following year. To rent a full plot for a year the cost is £37, a half is…