Very many thanks to Debbie Jeffries and her sharp eyes for spotting on Facebook some kind stranger’s post about finding an iPhone at the end of Marsh Lane.  Sadly it is almost certainly beyond repair but confirmed that shopping for a new one is the right things to do today!  Our daughter and family had just set out.....

Many thanks to everyone who has responded and tried to help.  Stella and Geoff

Celebration of the life of Maggie Vlasto

A service to celebrate the life of former resident Maggie Vlasto will be held on Friday 18 October 2019 at Motcombe Church at 12.30pm.

In case you missed the two massed flights of Hot Air Balloons over Pen today, you may have a chance to see them again over the weekend. 150 balloons are taking part.  More details are available on the Longleat website. Tickets for tomorrow are SOLD OUT but some are available for Sunday. They are expecting ‘perfect’ conditions for tomorrow morning’s launch which starts at 7am.....  There is also an evening event.

Verity Ockenden is racing today at the European Cross Country Championships in Tilburg, you may have seen her training around Pen since she moved here with her mother Fiona.

She will be running as part of the GB Senior Women’s team at 1235 our time. You can watch on the BBC red button, coverage for the under 20 and u23 events starts from 0930. There is a also livestream from European-athletics.org

Gillingham Library will be closed for refurbishment on Thursday 22nd and Friday 23rd November. Books may be renewed online at www.librarieswest.org.uk. Library queries - contact Shaftesbury Library 01747 852256.

Can you help us please?

Can you spare an hour to help us?

Stourton & Kilmington WI are having an open meeting with a talk by George Goodwin, historian & author based on the British Life of American's Founding Father.

Benjamin Franklin, statesman, diplomat, writer, important inventor and much more, lived in London for more than one-fifth of his life.  He dined with prime ministers, members of parliament, even kings. Member of the Royal Society and with an interesting mix of friends he was a long time loyal British royalist before…

Jim Ebner and myself are holding a work party on Saturday to clear the site in readiness for returning the site to pasture. If you have any time available to give us a hand, please see the details in the Events listing. You'd be welcome to salvage any unwanted fruit bushes etc... 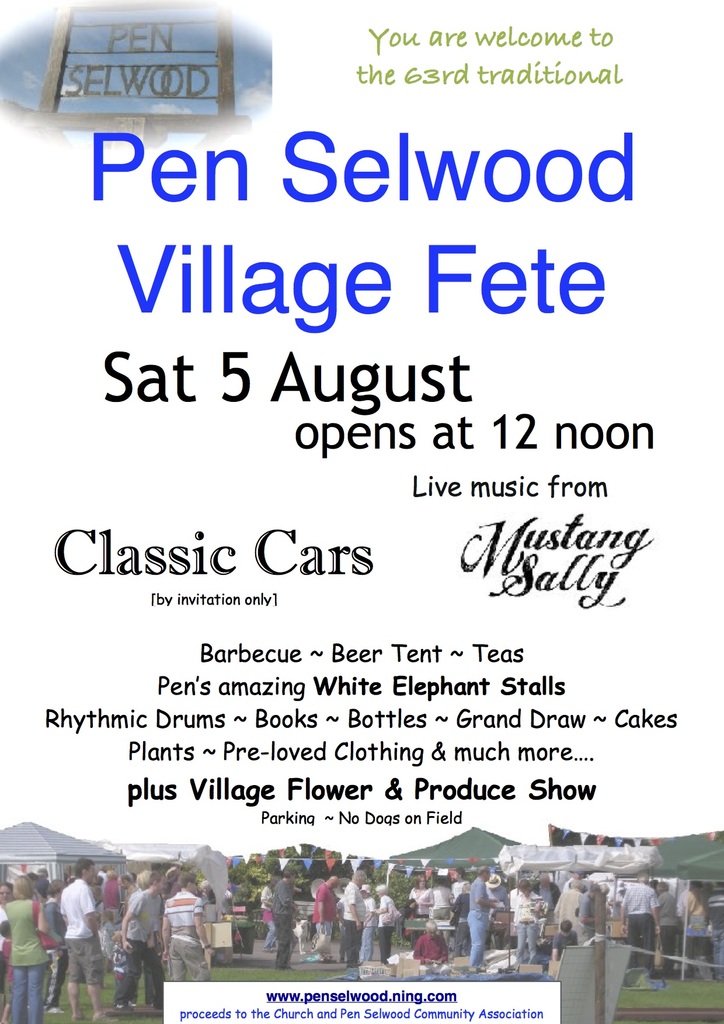 Has anyone seen a friendly brown chicken missing from The Green area? It went AWOL on Saturday.... Please contact Alex or Clive Kirby on 840846 Does anyone know who might have lost a small black male dog? He has a short coat and relatively short legs. He's not wearing a collar and is reluctant to be caught. Two young girls came door to door to locate the owner after finding him on the Village Community Field this morning, 21 July. Robbie and Ian are working in the Village Hall and think perhaps he has been a round for a few days.
Please spread the word..... Stella 841216

Due to the high level of interest, the Exhibition covering 60 years of the Pen Selwood Fete and Flower & Produce Show first displayed during the 2014 Show in St Michaels Church, will be available in the Village Hall from 29 August to 29…

A Sheltie (small Highland sheepdog) called Glen has run off this morning [Wed 9 July] after an incident whilst being walked. Could householders and landowners please keep an eye out for him and if they make a sighting, call 07932 165159 or 01963 31473 (Five Star Celebrations) or contact Adrian & Elizabeth on 01747 841431. Thank you