Earlier in the year, children from Bourton school attended the most successful newt count ever held at the reserve. Licensed Ranger Rachael Whaites conducted the count and all three of our native species were present, including well over 20 newts of the Great Crested newt species. Great crested newts are by easily Britain’s largest newt species reaching up to 17 cms and is one of Britain's most highly protected species.  Unfortunately, populations have declined over recent years as a result of the destruction and fragmentation of their habitat. They need clear water with sufficient space to perform their elaborate courtship displays, plus aquatic vegetation in which they lay their eggs singly, wrapped in a leaf.

Because they travel considerable distances when hunting in moist grassland, we can improve their survival chances by providing our own pond, but it must be surrounded by an area of rough grass. 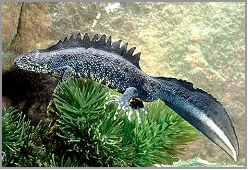 You need to be a member of Moldrams Ground Local Nature Reserve to add comments!