SSDC Rangers and volunteers alike had a great morning on Fri 24th, clearing a huge fallen larch that was blocking one of the main pathways through the reserve. The recent gales had caused at least 8 trees to fall, but none had caused any serious problems apart from the one massive larch and a smaller ivy-covered tree that had collapsed across the fencing into the top field. The other fallen trees and large branches, including a couple of massive side branches from an ancient oak, are being left to decay naturally to improve the natural habitat for invertebrates.

The largest tree was found to be at least 120 years old, judging from the annual growth rings on one of the side branches.

Six rangers, assisted by five volunteers from the neighbouring parishes of Bourton (who have just formed their own Habitats and Wildlife Group) and Charlton Musgrove cleared the debris. During the morning, in spite of the inevitable noise of work in progress, there were sightings of Roe Deer and Bank Vole. 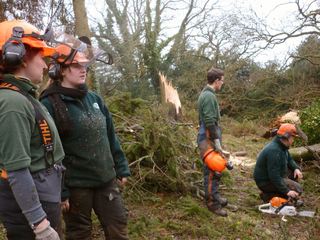 Senior ranger Rachael Whaites will shortly be contacting local landowners in order to help gain their support in advancing the reserve's management plan, a copy of which is posted on the Penselwood village website. Since the Hazel Dormouse was discovered on the reserve in 2013, it is now very important for a living hedgerow corridor to be established, supporting a good range of native shrubs, connecting the reserve to the nearby Stavordale forest. The Hazel Dormouse, one of Britain's rarest and most protected mammal species, requires a continuing and varied supply of flowers, nectar and fruits throughout the spring and summer months, together with a good supply of hazel nuts which it needs to fatten up in preparation for its winter hibernation. 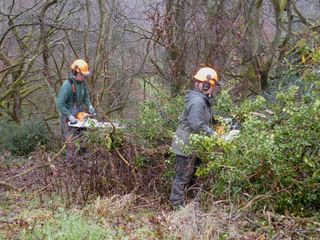 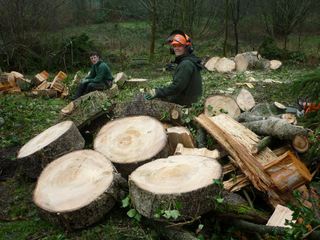