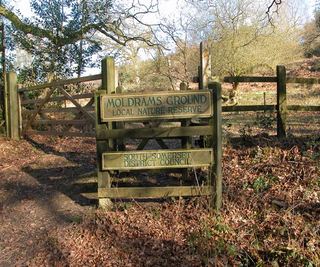 Moldram's Ground is a 4 acre countryside site in the parish of Pen Selwood, near Wincanton. It is a fine example of bog and unimproved grassland, surrounded by dry woodland which is an increasingly rare habitat. The site offers valuable habitat including four ponds and wetlands. Two of the ponds are home to a population of great crested newts.  A low impact bird hide provides cover for bird watching and a boardwalk completes an un-surfaced walking loop of the site. There is no dedicated ranger for the area but the sites team regularly visit to undertake project works and maintain the site.

The name Moldram's Ground was taken from three German brothers who had settled here. They had a family business making worsted stockings which were then sold locally. The remains of their cottage, close to the bird hide is no longer visible. The land was owned by Wessex Water until 1987 when it was transferred to South Somerset District Council.

There is an enormous amount of flora and fauna to be observed. Richard Place has identified and photographed a huge variety. Click here to see the photos.

Thanks for getting in touch regarding Moldrams Ground.

It has been a crazy year!  3/4 of our countryside team were redeployed at the start of the pandemic to help with a hub to support vulnerable residents and we have lost over 7 months of volunteering at Ham Hill, Yeovil Country Park and Chard Reservoir over the last year due to restrictions and lockdown. Coupled with the fact that the countryside sites have seen their busiest ever year in terms of visitors numbers, it has left the rangers spread somewhat thin on the ground with a huge backlog of work to get through.

Despite all of this, the rangers have managed to get over to Moldrams a few times in the last year, to make sure that it has been strimmed and all structures are safe. I have also been several times to meet family as it is a good halfway point for us to meet.  It may be looking a little 'unloved' but it is certainly safe.

Kristy and Matt from the Yeovil team had already planned to work at Moldrams next Thursday to carry out some strimming around the planted trees & they will check that the paths are clear and accessible too. We will not be opening the path along the top that takes you from the bench in the centre, past the pond to the steps in the top corner as it is far too wet and boggy to encourage people to walk across there.  Once we are in April with further restrictions easing, the team will be back every 6 weeks or so to carry out more regular maintenance works.

I have copied Kristy in to this email as there may be some tasks that she would like a group of volunteers to help with, but I'll let her liaise directly with you about that.

We will also be starting with our species monitoring at the site again from the beginning of April so hopefully this year, you should see more ranger presence again.