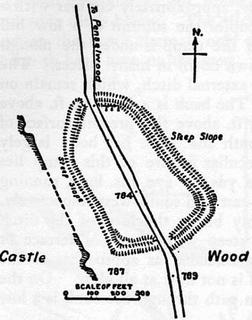 The battle of Peonnan is thought to have taken place here in 658. King Cenwalh (Cenwalch or Kenwalh), the Saxon King who ruled Wessex from 643 - 672, defeated the Britons in a series of battles including this one which, it is said, opened up the West Country to the Saxons. Kenwalh's Castle, or Cenwealhs Camp, a hill fort, lies to the North of Pen Selwood. Read Jonathan Cox's fascinating article on Pen Ridge through the Ages.

After the Norman Conquest, King William gave Penne to Roger Arundel. The Normans also left their mark on our village. Three Motte and Bailey castles, all within 2 miles of the church, perhaps gives some indication of the strategic importance that they awarded to the area. The remains of one castle can be found in Cockroad Wood (just outside the Parish of Pen Selwood), the second, smaller castle remains are at Castle Orchard and the smallest of the three is at Ballands. All three are clearly marked on Ordnance Survey maps of the area. Some older maps also show the site of a church near Ballands Castle. All three castles are now little more than grass or tree covered mounds.

In 1086 Pen Selwood was worth £3 and consisted of 16 dwellings. See the Doomsday record.

More recent history of our village includes details about buildings:

Pen Selwood's history has been recorded in considerable detail in various publications over the years: